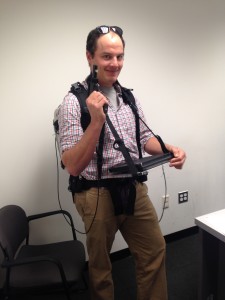 Charlie is ready for field work with the spectral hand-sensor.

As the 2014 spring semester comes to a close, the UHPSI team has begun preparing for the summer field season. One of the most important pieces of equipment that the team will be taking to Wyoming is the Yale Center for Earth Observation’s (YCEO) portable spectrometer.

So, what’s a spectrometer? 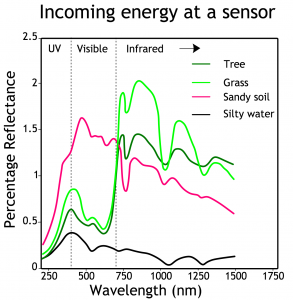 A spectrometer is a device that captures the reflected light from a surface and provides measurements of its intensity across a wide breadth of the electromagnetic spectrum (see here). Essentially, everything we see reflects.  Viewing the reflectance of a certain object with each wavelength value (some of which make up the colors humans see, some of which are outside our abilities) creates a unique pattern that can distinguish that object from the pattern of another object (see graph). Each of these colors can be broken down and measured via the brightness values across the wavelengths.

And how is this information used?

Larry Bonneau of the YCEO oversees the UHPSI team’s first few practice runs with the spectrometer.

The UHPSI team is particularly interested in collecting the information regarding the unique spectral patterns that Leafy Spurge (Euphorbia Esula)—the invasive species that the team is studying in their Google Project—displays at various times throughout the growing season. The team will use the information collected in the field with the spectrometer as a reference for locating spurge within a satellite image. To describe the process more particularly, satellite data are images made up of squares in a grid called pixels, just like in a photo; each pixel has a collection of reflectance values from across the spectrum. Theoretically, the pixels of the image that correspond to the areas of leafy spurge should match spurge’s unique reflectance pattern as collected in the field. Therefore, the team can guarantee they have an accurate signal for spurge because they’ll be gathering the values on the actual ranch and in-person. 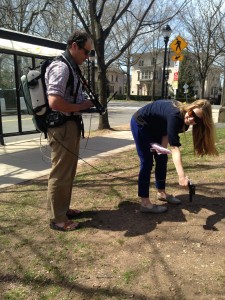 Charlie and Lindsi collect the spectral signature of soil on the greenway between Kroon Hall and the YCEO.

How does the spectrometer actually work?

It’s a very simple process: one team member holds the hand-sensor a certain distance from the surface he/she is interested in studying. Again, since every surface or object on Earth reflects a certain amount of light, the color/spectral pattern of each surface and object can be collected. The hand-sensor acts in a similar way to a human eye, and registers the spectral pattern into a computer program that computes its number values across the spectrum. The computer then simply saves this information for subsequent download and analysis.