People tend to associate cactus with the deserts of the Southwest, but there is at least one species that’s also found on the High Plains. This is prickly pear (Opuntia humifusa), whose native range actually extends eastward from Wyoming and Montana all the way to New England and south to Florida. The bright yellow flowers are followed by pear-shaped fruits that were an important seasonal food source for Native Americans. 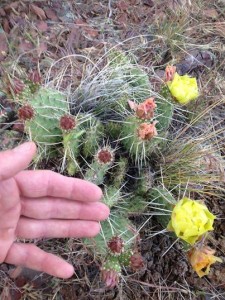