Sometimes studying wildlife feels a bit like you’re a detective solving a mystery. You’ve got a question that no one really knows the answer to, a whole lot of information that may or may not be relevant, and probably some bureaucracy to navigate. But when solving it means that you might help a critter’s chance of survival, it’s all worth it.

This summer I’m working on the Trumpeter Swan Habitat Mapping project with Ucross, the Nature Conservancy, and Wyoming Game and Fish. I’ve been getting my feet wet this past week learning about trumpeter swans in the Green River Basin of Wyoming and challenges to their recovery in the region. Overall, trumpeter swans have made a huge comeback since their almost-extinction in the 1930s from over-hunting. They now form three distinct populations residing along the Pacific coast, the Rocky Mountains, and within the interior of the continent. While most flocks are increasing in size, the nonmigratory swan population living in northwest Wyoming has been experiencing a mysterious decline in productivity and nesting success. The number of nesting pairs is still far below desired levels and imposes a significant roadblock to species recovery in the region. 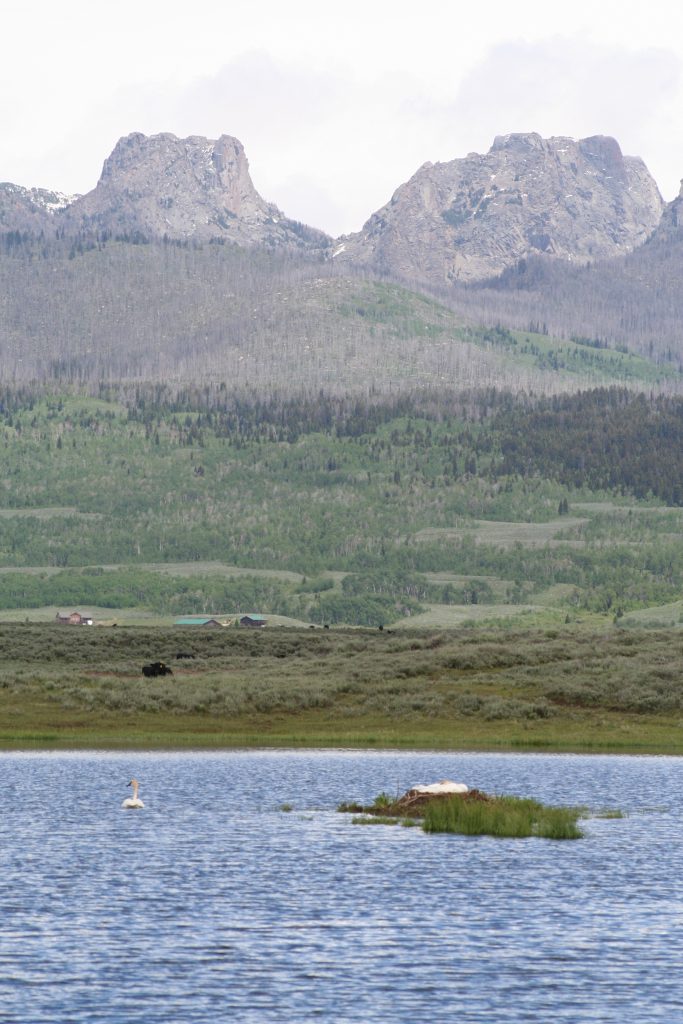 Swans nesting on a private ranch near Pinedale, WY.

Our team will be using geospatial data to identify habitat characteristics that attract swans to particular nesting sites. In doing so, we hope to uncover possible reasons for recent declines in swan productivity as well as areas that could serve as expansion habitat. I’ve been thinking about this project a little bit like its a crime drama (I watched too much Criminal Minds this semester). We’ve got the mysterious disappearance of an important community member, a couple of clues, and a team of hardworking forensic ecologists on the case. The goal is to use these clues from the environment (rasters!) and nesting site locations (the scene of the crime!) to identify which habitat characteristics are important and which qualities might be missing. Putting these puzzle pieces together can help refocus conservation efforts by allowing us to identify important nesting areas that need to be protected as well as potential habitat for population expansion or relocations.

Over the last week, I’ve been looking into the literature to see what environmental variables might be affecting swan productivity. Naturally, winters in Wyoming can be difficult to survive for any species, especially one like the swan that depends on ice-free areas to forage for freshwater vegetation. What’s interesting is that the Wyoming trumpeter swan flocks share this winter habitat with another flock of swans that migrates southward from the Canadian Rockies. These Canadian swans, despite experiencing the same winter conditions as ours, are not experiencing the same decline in productivity. Looking at the difference in summer habitat between the flocks might give us a clue as to what’s happening in Wyoming that’s impeding swan growth.

There are a number of possible explanations. One is that human actions, especially tourism, are disturbing nesting swans, causing nest abandonment or decreased incubation time. Another is that changes in temperature and precipitation due to climate change lead to increased nest flooding and a decrease in forage quality. It’s also been hypothesized that Wyoming swans lost the ability to migrate due to population crashes in the mid 1900s and that relocations are needed to return swans to more ideal southern nesting sites. Personally, the theory that I find the most interesting is that changes in predator populations, especially an increased abundance of wolves and grizzlies in the area, are causing nests to fail more frequently through egg and cygnet (baby swan) mortality, decreased incubation time, and changes in female energy budgets. This is also the most dramatic theory and the only one involving murder.

In two weeks I’ll be headed out to Wyoming to do my first site visit. We’ll be touring nesting sites from Jackson to Seedskadee National Wildlife Refuge to Lander to see what our swans are doing on the ground (literally). I’m looking forward to finding some more clues that can help us figure out how to get trumpeter swan populations back on track. 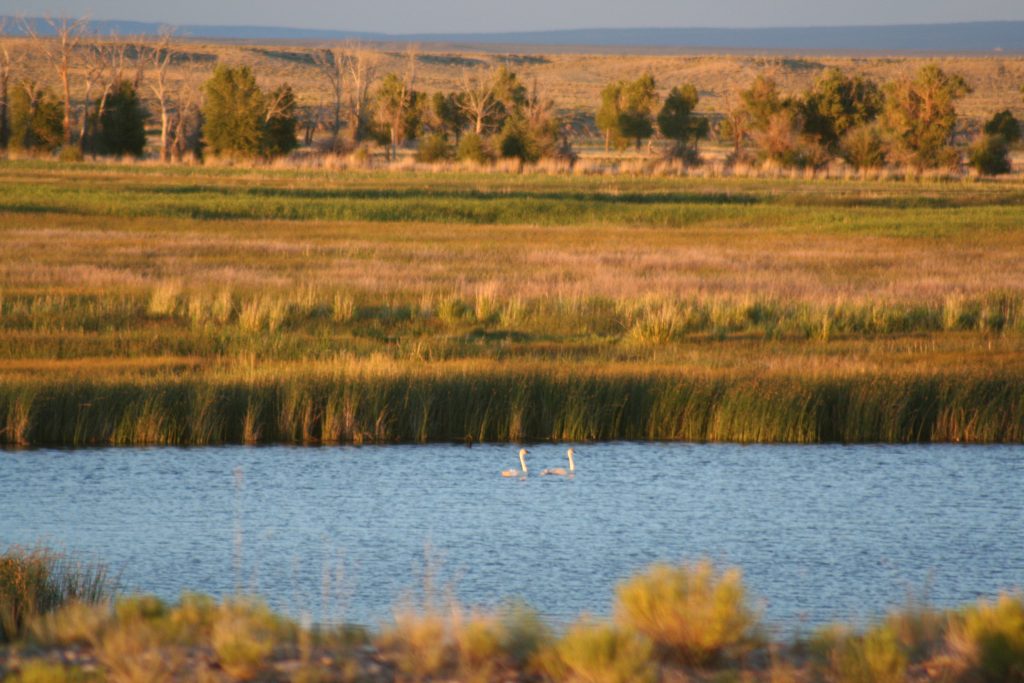 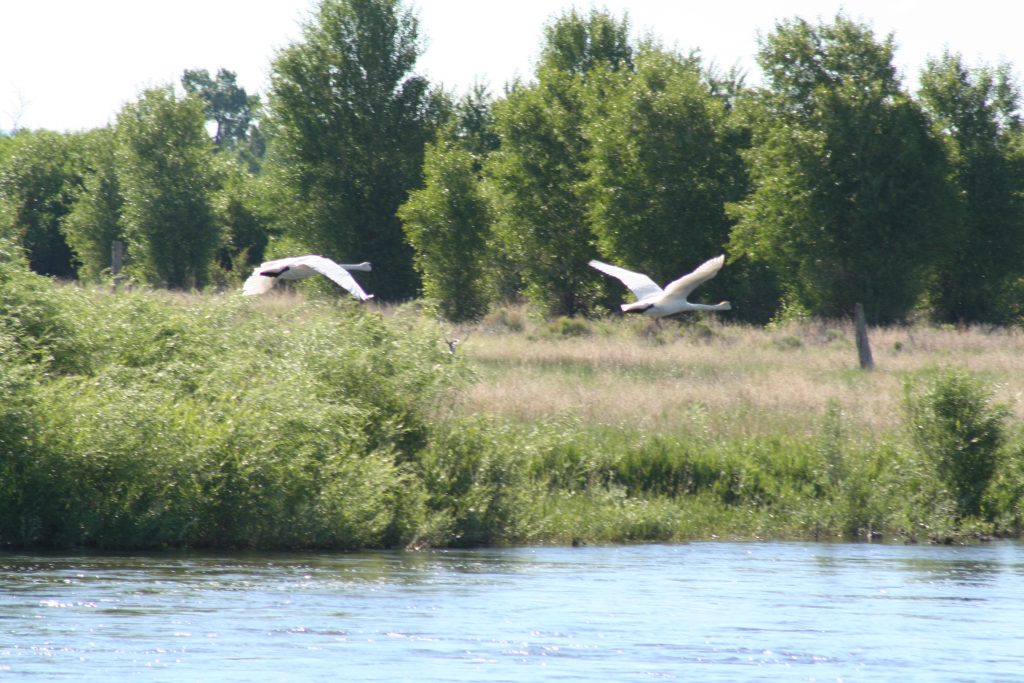 More swans! Can’t get enough of these lovely birds.