Standing on the hill at the center of the Ucross’s open range, the sheer geographic size of the place doesn’t fail to impress (especially to two fellows born and raised on the East Coast).

Equally impressive and rich in character is Ucross’s history, extending back in time over 100 years. In the far northern pastures sit two stone houses — unoccupied but well maintained. They’re the only human structures (excepting railroad tracks) for miles around and impart an almost sullen presence.

The story goes: sometime in the early 1890s, a gentleman (whose name has become arcana and thus quite difficult to find) devised a plan to build a community in this remote location. He proudly erected two stone houses as the first structures of his budding town and sent an application in to the federal government to start a post office — what better way to sow the seeds of a community than to maintain a connection with the rest of the world through mail?

Unlucky for the gentleman, however, the town of Clearmont (several miles east then north) had filed their application for a post office just days before. Once their application had been approved, the federal government found no need for a separate post office in such “close” proximity to the new town. And so the gentleman departed from this land and left his stone houses to withstand the winds of Wyoming’s sage covered rolling hills. 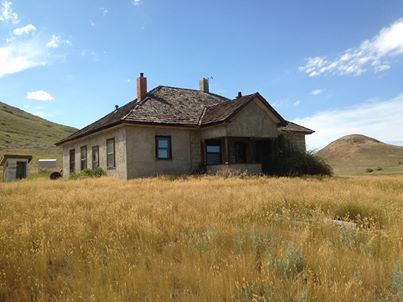